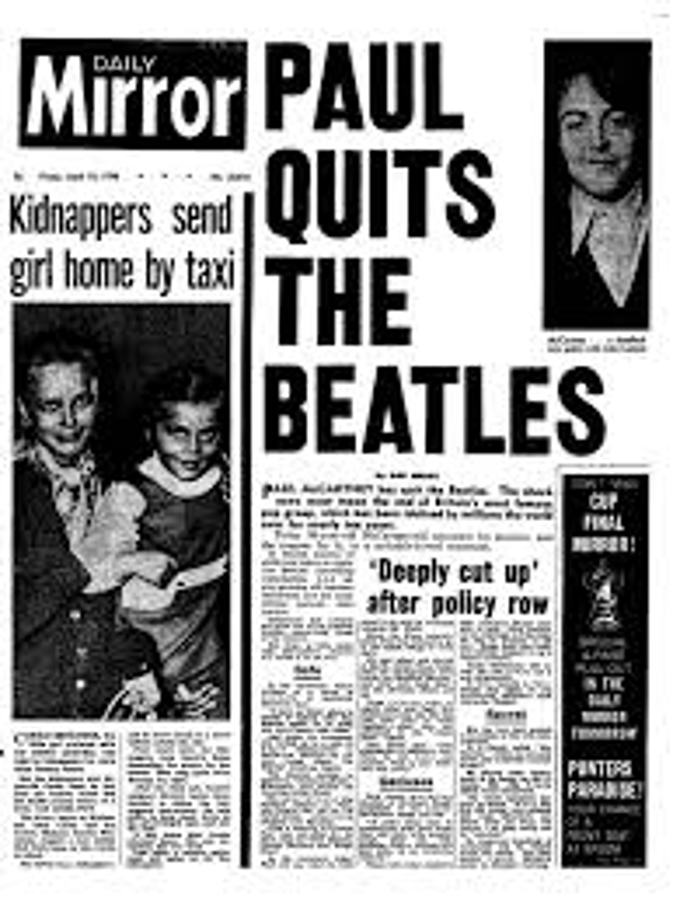 Paul McCartney announces the breakup of the Beatles

The legendary rock band the Beatles spent the better part of three years breaking up in the late 1960s, and even longer than that hashing out who did what and why. And by the spring of 1970, there was little more than a tangled set of business relationships keeping the group together. Each of the Beatles was pursuing his musical interests outside of the band, and there were no plans in place to record together as a group. But as far as the public knew, this was just a temporary state of affairs. That all changed on April 10, 1970, when an ambiguous Paul McCartney “self-interview” was seized upon by the international media as an official announcement of a Beatles breakup.

The occasion for the statements Paul released to the press that day was the upcoming release of his debut solo album, McCartney

Q: "Is this album a rest away from the Beatles or the start of a solo career?”

PAUL: “Time will tell. Being a solo album means it’s ‘the start of a solo career…and not being done with the Beatles means it’s just a rest. So it’s both.”

Q: “Is your break with the Beatles temporary or permanent, due to personal differences or musical ones?”

Q: “Do you foresee a time when Lennon-McCartney becomes an active songwriting partnership again?”

Nothing in Paul’s answers constituted a definitive statement about the Beatles’ future, but his remarks were nevertheless reported in the press under headlines like “McCartney Breaks Off With Beatles” and “The Beatles sing their swan song.” And whatever his intent at the time, Paul’s statements drove a further wedge between himself and his bandmates. In the May 14, 1970, issue of Rolling Stone, John Lennon lashed out at Paul in a way he’d never done publicly: “He can’t have his own way, so he’s causing chaos,” John said. “I put out four albums last year, and I didn’t say a f***ing word about quitting.”

By year’s end, Paul would file suit to dissolve the Beatles’ business partnership, a formal process that would eventually make official the unofficial breakup he announced on this day in 1970.