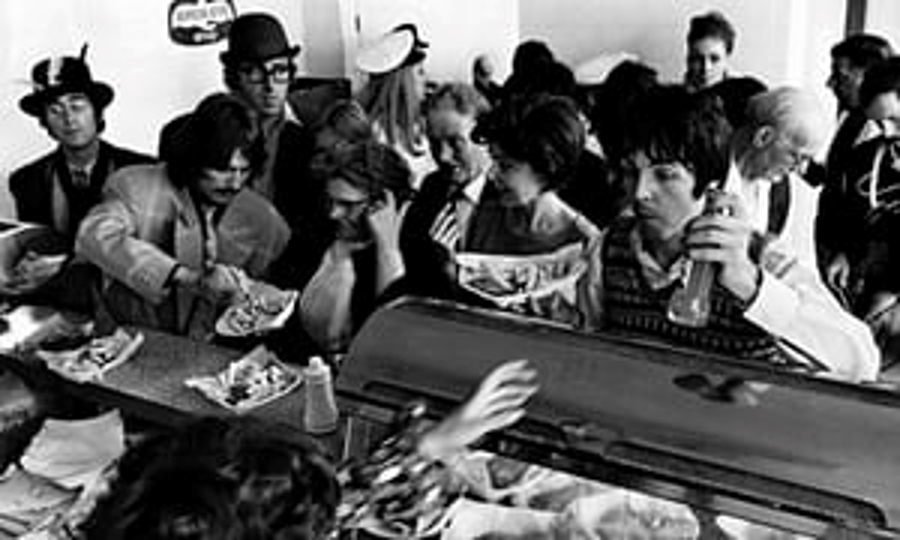 The first week of filming for the Magical Mystery Tour television special saw a number of scenes being filmed between Newquay and London.

The coach party had stayed for three nights at the Atlantic Hotel in Newquay. Following breakfast on this morning, a brief scene was filmed in front of the coach and hotel in which the entire party cheered and waved to the cameras.

The coach then left for London, stopping for several scenes en route. The first of these was unused in the final edit, but involved people crowding into a tiny chip shop, Smedley's at 108 Roman Road in Taunton, Somerset. The Beatles were filmed firstly from behind the counter ordering food, and then in the main part of the shop eating their lunch.

More filming took place in a country pub, a hall, a hostel and on board the coach. During the latter, accordionist Shirley Evans led the coach party with a number of singalong songs including Toot Toot Tootsie, When Irish Eyes Are Smiling, When The Red, Red Robin Comes Bob, Bob, Bobbin' Along and the Can Can.

The coach dropped John Lennon, George Harrison and Ringo Starr off in Virginia Water, Surrey. Paul McCartney remained on board until its final destination, Allsop Place in London.

A second week of filming for Magical Mystery Tour began on Monday 18 September 1967.