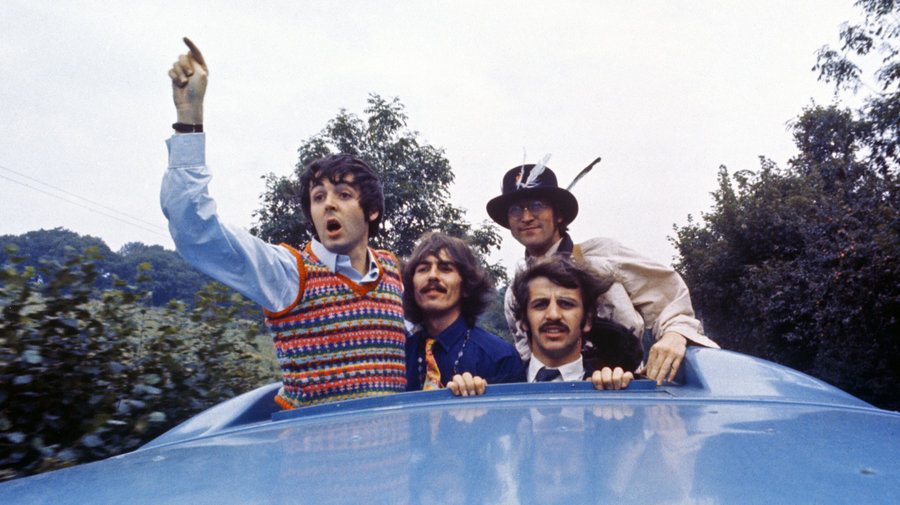 The first full day of filming for The Beatles' television film Magical Mystery Tour took place in the south west of England.

The coach had arrived in Teignmouth in Devon on the previous night, and the party stayed at the Royal Hotel. Following breakfast on this day, the coach set off once again and headed for the Dartmoor village of Widecombe.

The annual village fair was being held in Widecombe, and it was decided that filming should take place there. However, the driver Alf Manders took a shortcut in order to beat traffic queues, and the coach became stuck on a narrow bridge.

The coach had to be reversed for half a mile, and tempers frayed on board. Footage was made of on-board arguments, though none was used. In the end The Beatles decided to abandon the trip to the fair, disappointing some local fans who had heard about their impending arrival.

The mystery trip continued instead to Plymouth on the A38. The party had lunch in the Grand Hotel, situated on the famous Plymouth Hoe, where The Beatles posed for photographers from national newspapers.

John Lennon and Paul McCartney were also interviewed by BBC TV reporter Hugh Scully. The interview was shown as the lead item on the local news programme Spotlight South West on the following day from 5.55pm.

The party then boarded the coach once more, and continued along the A38. Stops were made at Liskeard and Bodmin - where filming took place outside West End Dairy in Higher Bore Street and no Paull Road. For the latter scene, the courier Jolly Jimmy Johnson, played by Derek Royle, boarded the coach and welcomed everybody. The sequence was used at the beginning of the film.

The final destination for the day was the Atlantic Hotel on Dane Road, Newquay. The Beatles had intended to stay for just one night, but eventually decided to use it as a base for three nights. They slept in four holiday flats.