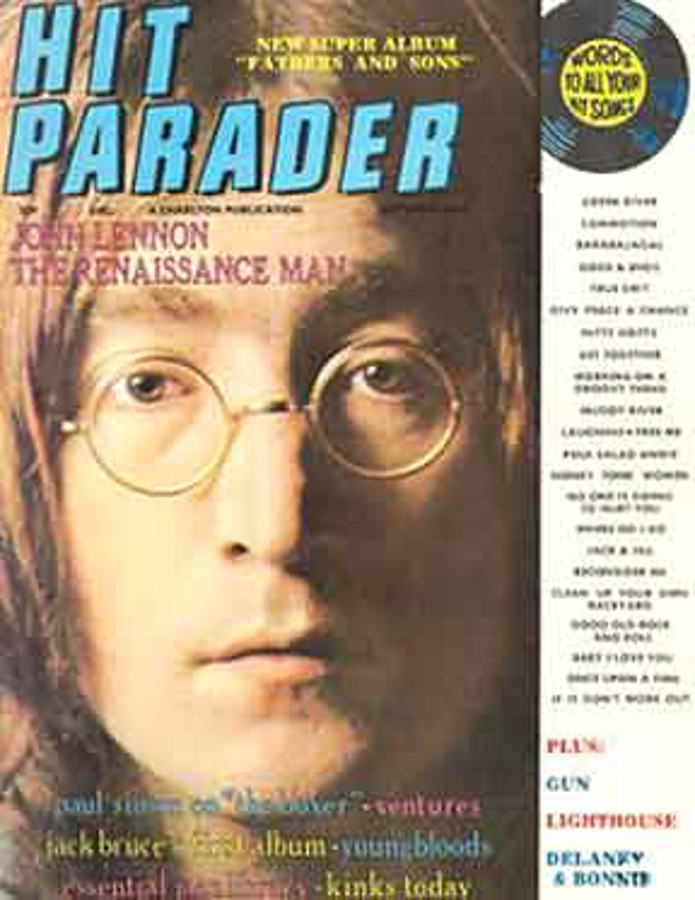 In late April of 1969, NME's Alan Smith sat down with John Lennon to discuss the release of the Beatles' next album. While the recording for the 'Let It Be' album had already been completed and work on 'Abbey Road' had just begun, John mistakenly states that the next LP should be released "in about eight weeks." What could not be known at the time was that 'Let It Be' would remain shelved until its much-delayed release on May 8th 1970, long after 'Abbey Road' had enjoyed a lengthy stay at number one.

This interview, entitled 'Beatles Music Straightforward On Next Album,' was originally published in the May 3rd 1969 issue of the New Musical Express. It would later be reprinted in the December 1969 issue of Hit Parader magazine in the States.

At the time of this chat, the Beatles had recently released the hit single 'Get Back / Don't Let Me Down,' and their upcoming single 'Ballad Of John And Yoko / Old Brown Shoe' would be released on May 30th.

In the interiview, John tells how Beatles' friend Magic Alex "wrote half" of the song 'What A Shame Mary Jane,' which would not be officially released until decades later on the Beatles Anthology CD set.

Alan Smith removes himself from the printed interview and lets John do the talking.

"If I could only get the time to myself right now, instead of all this Monopoly and financial business with Northern Songs, I think I could probably write about 30 songs a day. As it is, I probably average about 12 a night. Paul too... He's mad on it. It's something that gets in your blood. I've got things going around in my head right now, and as soon as I leave here I'm going around to Paul's place and start work.

"The way we're writing at the moment, it's straightforward and there's nothing weird. Songs like 'Get Back,' things like that. We recorded that one on the Apple roof but I'm not sure if that's the version that went out. We always record about ten versions. You get lost in the end.

"For me, the satisfaction of writing a song is in the performing of it. The production bit is a bore. If some guy would invent a robot to do it, then it would be great. But all that 'get the bass right, get the drums right,' that's a drag to me. All I want to do is get my guitar out and sing songs.

"I quite fancy giving some live shows, but Ringo doesn't because he says, you know, it'll just be the same when we get on, nothing different.

"I can't give you any definite plans for a live show when we're not even agreed on it. We've got to come to an agreement. For a start, there's too much going on now for us to even talk realisitically about going on tour.

"In a way, that's why it's unfortunate that all the publicity came out about doing live shows when it did. We were only thinking about it vaguely, but it kind of got out of hand. I suppose the next great Beatle Event will be the next LP, in about eight weeks.

"A lot of the tracks will be like 'Get Back,' and a lot that we did in one take, kind of thing. We've done about 12 tracks, some of them still to be remixed.

"Paul and I are now working on a kind of song montage that we might do as one piece on one side. We've got two weeks to finish the whole thing so we're really working at it.

"All the songs we're doing sound normal to me, but probably they might sound unusual to you. There's no 'Revolution #9' there, but there's a few heavy sounds. I couldn't pin us down to being on a heavy scene, or a commercial pop scene, or a straight tuneful scene. We're just on whatever's going. Just rockin' along.

"The follow-up to 'Get Back' is 'Ballad Of John And Yoko.' It's something I wrote, and it's like an old-time ballad. It's the story of us going along getting married, going to Paris, going to Amsterdam, all that. It's 'Johnny B. Paperback Writer.'

"As I say, we don't want to release it straight away because it might kill the sales, and I suppose we're cowards that way. I don't regard it as a separate record scene. It's the Beatles' next single, simple as that.

"The story came out that only Paul and I were on the record, but I wouldn't have bothered publicizing that. It doesn't mean anything. It just so happened that there were only two of us there -- George was abroad and Ringo was on the film and he couldn't come that night.

"Because of that, it was a choice of either re-mixing or doing a new song -- and you always go for doing a new one instead of fiddling about with an old one. So we did and it turned out well.

"As for all this financial business that's going on, it does get in the way of the writing, but I don't find it that much of a drag. It is. It is that much of a drag. It's like Monopoly, what with all these bankers -- and played around a big table with all these heavies. You know the bit... 'Then I'll give you The Strand or Old Kent Road,' and you say 'No, you give me two houses.' It's just like that.

"I don't have any involvement in Mary Hopkins records, it's pure Paul. But there is one discovery I'd like to promote.

"I think I'm going to make a pop record with Yoko. I've got this other song we were singing last night, and I think it will be quite a laugh for her to do a pop record. It's one I've written myself, and it's about Yoko, but I'll just change the word Yoko to John, and she can sing it about me.

"This TV film 'Rape' we did for Austrian TV -- so, it didn't get fantastic reviews, but then neither does every record the Beatles make. Hell, do you remember the reviews of 'Hey Jude?' I remember Stuart Henry saying 'Och weel, y' either like it orr y' don't.' The critics are the same with 'Rape.' It's a good film, and we stand by it. THere's a few people understand it, and the rest have no idea. They don't know the difference between Jean Luc Godard and Walt Disney.

"But that'll die, and Yoko and I will just have to overcome our image, and people'll have to judge us on our art and not the way we look.

"You can't say Paul and I are writing separately these days. We do both. When it comes to needing 500 songs by Friday, you gotta get together. I definitely find I work better when I've got a deadline to meet. It really frightens you and you've got to churn them out. All the time I'm sort of arranging things in my mind.

"The film that the Beatles made recently, of us recording and working, somebody's editing that at this moment. It's 68 hours, and they're trying to get it down to 5 for several TV specials.

"This image thing that people are always on about with the Beatles -- image is something in Joe Public's eye. That's why it's a drag when people talk about fresh-faced Beatles, like it was five years ago. I mean, we're always changing, like the TV clip of 'Get Back.' Now I've got the beard, Paul is clean shaven, and George is the one with the mustache. Even I can't keep up with our own image. I come into Apple one day, and there's George got a new head on him.

"So if that's the way it is with us, I tell you, the public doesn't stand a chance of keeping up with how we look. And anyway, who we are is up to ourselves personally. Music is what's important.

"As far as that's concerned in my case, Yoko and I stimulate each other like crazy. For instance, did you know she'd trained as a classical musician. I didn't know that until this morning. In college she majored in classical composition.

"I've just written a song called 'Because.' Yoko was playing some classical bit, and I said 'Play that backwards,' and we had a tune. We'll probably write a lot more in the future.

"I've written with other people as well. For instance, there was a mad thing I wrote half with our electronics genius, Alex. It was called 'What A Shame Mary Jane Had A Pain At The Party,' and it was meant for the last Beatles album. It was real madness, but we never released it. I'd like to do it again.

"There was another song I wrote around 'Pepper' time that's still in the can, called 'You Know My Name Look Up The Number.' That's the only words to it. It just goes on all the way like that, and we did these mad backings. But I never finished it, and I must.

"Why did we spring 'Get Back' on the public so suddenly? Well, we'd been talking about it since we recorded it, and we kept saying 'That's a single.' Eventually we got so fed up talking about it we suddenly said 'Okay, that's it. Get it out tomorrow.'"