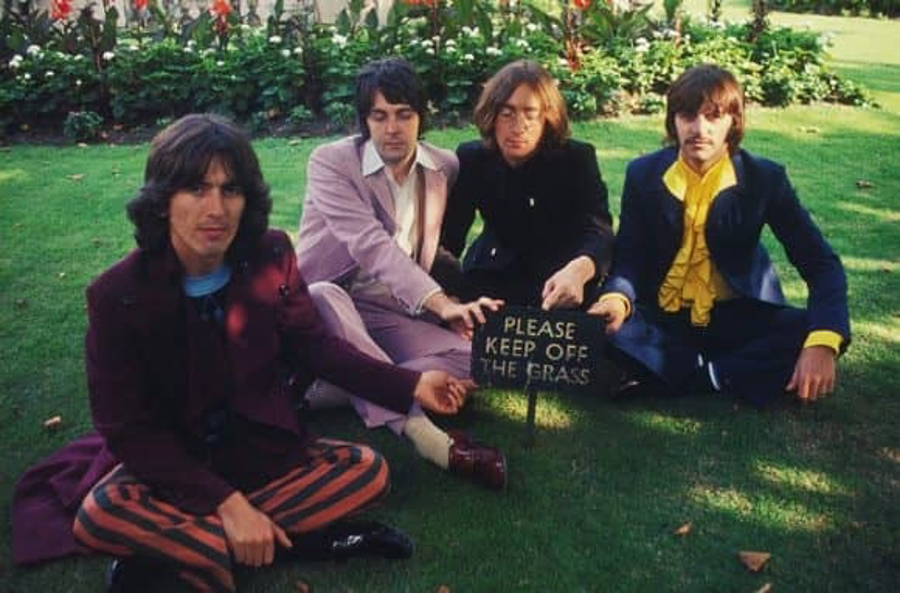 Demo recordings for the White Album

The precise date is unknown, but towards the end of May 1968 The Beatles met at Kinfauns, George Harrison's bungalow in Esher, Surrey. There they recorded demo versions of a number of songs written in India, 19 of which later appeared on the White Album.

The 27 songs believed to have been taped at Kinfauns were recorded on Harrison's Ampex four-track reel-to-reel tape recorder. They were mostly grouped together by the composer of each song, although John Lennon's songs were more scattered across the day. They were most likely taped in this order:

Cry Baby Cry – with a different intro and ending from the album version
Child Of Nature – unreleased, but later became Jealous Guy
The Continuing Story Of Bungalow Bill – the other Beatles make animal noises
I'm So Tired – with a slightly different spoken passage
Yer Blues – John Lennon is 'insecure' rather than 'suicidal'
Everybody's Got Something To Hide Except Me And My Monkey – far less frenetic than the studio version
What's The New Mary Jane – included on Anthology 3
Revolution 1 – lacks the 'you say you'll change the constitution' verse
While My Guitar Gently Weeps – with different lyrics in places
Circles – unreleased by The Beatles
Sour Milk Sea – unreleased by The Beatles
Not Guilty – studio version included on Anthology 3
Piggies – rather than 'eat their bacon', the piggies 'cut their pork chops'
Julia – in a higher key and with the verses in a different order
Blackbird – with a double-tracked vocal, no break, a slightly slower tempo
Rocky Raccoon – shorter, without the opening and final verses
Back In The USSR – lacks the final verse
Honey Pie – released on Anthology 3, with the final verse edited out
Mother Nature's Son – without the guitar intro of the studio version
Ob-La-Di, Ob-La-Da – with a double-tracked vocal from Paul McCartney
Junk – included on Anthology 3
Dear Prudence – with a spoken ending and double-tracked vocals
Sexy Sadie –
Happiness Is A Warm Gun – lacks the intro and the final section
Mean Mr Mustard – his sister is called Shirley, not Pam
Polythene Pam – slightly different chords; 'well it's a little absurd but she's a nice class of bird'; the verses are repeated
Glass Onion – with double-tracked gobbledygook from Lennon

Most of the recordings were widely bootlegged, although the release of Anthology 3 resulted in previously-unheard demos of the four final songs. The seven Kinfauns demos included on Anthology 3 – licensed to Apple by George Harrison – were also of a better quality than the bootlegs.

It is possible that not all of the demos were recorded at Kinfauns, and it has been speculated that some were recorded alone by the songs' composers. Alternatively, previously-made recordings may have been brought to Harrison's house for overdubbing, but, again, this is far from clear.

Of the songs unreleased by The Beatles in 1968, perhaps the best known is Child Of Nature. This was inspired by a Maharishi Mahesh Yogi lecture, and was lyrically similar to Mother Nature's Son. Lennon later reused the melody for 1971's Jealous Guy.

What's The New Mary Jane was based around a nursery rhyme-style melody, and in the studio became one of Lennon's first avant garde compositions. It remained unreleased until Anthology 3, despite Lennon's various attempts to have it released by The Beatles or the Plastic Ono Band.

Two of Lennon's songs, Mean Mr Mustard and Polythene Pam, were held back until 1969's Abbey Road, when they became part of the 'long medley'.

Just one of Paul McCartney's songs – Junk – was unreleased by The Beatles, although they returned to it during the Get Back sessions in early 1969. It eventually found a home on McCartney's first solo album.

Harrison fared less well, with three of the five demos failing to be included on the White Album. A studio version of Not Guilty should have appeared on that record, although it was eventually included on Anthology 3. Circles, meanwhile, wasn't issued until Harrison's 1982 solo album Gone Troppo.

Sour Milk Sea was given to Apple recording artist Jackie Lomax. It was his debut single later in 1968, produced by Harrison with McCartney on bass and Ringo Starr on drums.

It isn't known whether any of The Beatles' wives or girlfriends were present, although a female voice may be discernible on Revolution 1. Mal Evans and Derek Taylor are also addressed by the group on the bootleg recordings, and may have contributed.

The demo songs were mono mixed by Harrison, with copies given to each Beatle. The general public first heard them in the late 1980s as part of the Lost Lennon Tapes radio series, and 23 had entered general circulation by the early 1990s.

I just realized that I've got a really good bootleg tape – demos we made at my house on an Ampex 4-track during The White Album.

Work began on the album on 30 May at EMI Studios, Abbey Road.

We are going in with clear heads and hoping for the best. We had hoped this time to do a lot of rehearsing before we reached the studios rather than rehearse actually on the instruments but, as it happens, all we got was one day.