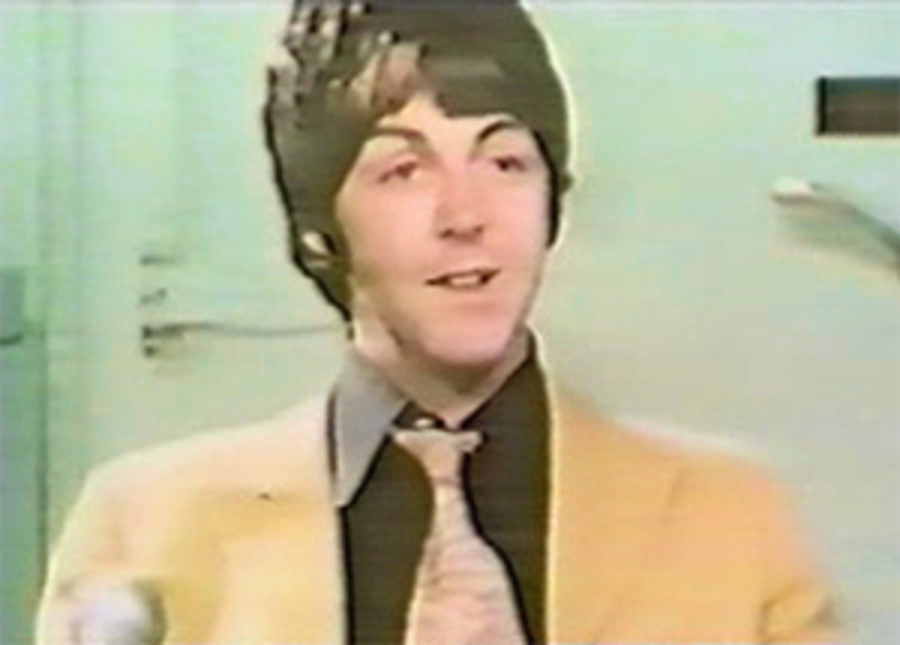 This chat with Paul McCartney appears in the program 'All My Loving - A Film of Pop Music,' directed by Tony Palmer.

At the time of it's airing, this 1968 BBC documentary was both highly-acclaimed and controversial. It captured the changing attitudes of the late sixties by mixing graphic news footage of police brutality and the vietnam war with the rock music of times. Heavily interspersed throughout are interviews with many of 1968's more influencial rock stars. Also appearing in this made-for-TV film were Frank Zappa, Jimi Hendrix, Eric Burdon and others. Tony Palmer spoke with Paul in an interview that was filmed on May 23rd 1968. The documentary was telecast on BBC television on November 3rd.

As the interview segment begins, the film has drawn a comparison between the growing seriousness of rock 'n' roll and other styles of music which in the past had been taken more seriously, such as opera and the classics.

PAUL: "I was always frightened of classical music. And I never wanted to listen to it because it was Beethoven and Tchaikovsky, and sort of, big words like that... and Schoenberg. I mean, like... A taxi driver the other day had some sheet music of a Mozart thing, and I said 'What's that?' And he said 'Oh, that's the high-class stuff. You won't like that. No no, you won't like that.' And I said, 'well, what is it?' (giggles) He said 'No, you won't like it. It's high-class, that. It's very high-brow!' And uhh, that kind of way I always used to think of it. I used to think 'Well you know, that's very clever, all that stuff.' And it isn't, you know. It's just exactly what's going on in pop at the moment. Pop music is the classical music of now."

"People just take our music... and you know, in a line we sort of say 'She was just seventeen,' and they just read everything into it. Like, 'She was a seventeen-year-old nymphomanic, working on the streets of Broadway.' But you know, all we meant is 'She was just seventeen.' But it might mean all the other as well... I don't know, you know. (smiles) I have no idea if there's any Aeolian cadences and... myasmic climaxes and all of that." (laughs)

"We're the last people to know about our songs, because the pop world's never heard the pop world as such. It's like, if you look at a snapshot of yourself, you're looking at what tie you were wearing or whether you were looking nice in the snapshot. But anyone else will just take the snapshot and say 'Oh, that's good. That's a snapshot of Tony,' you know. We're always just thinking of ourselves as just happy little songwriters. (giggles) Just little rockers, you know. Just playing in a rock group. But it gets more important than that, after you've been over to America... and you've sort of... got knighted." (laughs)

"And when we were touring, everybody was at a sort of peak of hysteria. Instead of just thinking, 'Oh, that's nice...' I mean, we could have just thought, 'A ha!! Click!! Let's use this!!' but there's no desire in any of our heads to sort of take over the world, you know. That was Hitler -- that was what HE wanted to do. There is, however, a desire to get power in order to use it for good. (comically points to camera) When you've got power, you've got to use it for the good!"

"Because like everyone else, we read the papers... we go through all the things that most people go through. So when everyone wants to say a thing at a certain time, it's handy being a songwriter. You know, you can put your finger on it."