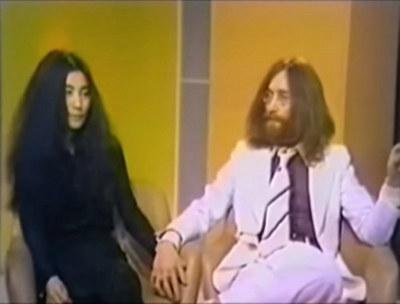 Today, John and Yoko Ono pre-recorded an appearance on The David Frost Show.

The recording took place at InterTel studios at Stonebridge House in Wembley, London. The David Frost Show was syndicated in the United States, allowing the Lennons to broadcast their peace message to a wider audience than they would get in the UK.

John and Yoko Ono began by throwing acorns into the audience; Lennon proclaimed it "acorns for peace week". He also held aloft a copy of Unfinished Music No 2: Life With The Lions, and wished the Queen a happy birthday.

Then Yoko Ono gave Frost a "box of smile". When the host opened the box, he found a small mirror inside, designed to reflect back his own smile.

John discussed the Two Virgins with Lennon proudly claiming that it was selling for £10 on the black market after being widely banned. Frost joked that, where it had gone on sale, the price tag had been placed in a strategic place on the controversial cover.

Extracts of Cambridge 1969 and No Bed For Beatle John were played from a copy of Life With The Lions. Frost asked the couple why they record and release such unfinished works, which led Ono into a discussion on the nature of art and creation.

Following a commercial break, Frost asked about Bagism, and Lennon and Ono explained their desire to live in a world free of prejudice and discrimination. Lennon talked about their press conference in Vienna.