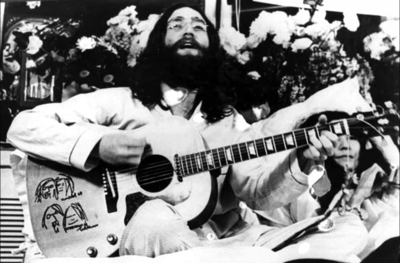 John Lennon and Yoko Ono clashed with satirical cartoonist Al Capp in Montreal hours before the recording of Give Peace A Chance at the Queen Elizabeth Hotel in Montreal, Canada.

John and Al Capp had an argument that later appeared in the documentary film Imagine. Capp introduced himself with the words "I'm a dreadful Neanderthal fascist. How do you do?", and later sarcastically congratulated Lennon and Ono on their Two Virgins album cover.

Then John Lennon and Yoko Ono recorded Give Peace A Chance in room 1742 of the Queen Elizabeth Hotel.

The recording session, which had been arranged at the last minute, was attended by dozens of journalists and celebrities, including Allen Ginsberg, Abbie Hoffman, Tommy Smothers, Timothy Leary, Petula Clark, Dick Gregory, Murray the K, Derek Taylor, Rabbi Abraham Feinberg and members of the Radha Krishna Temple. Many of them were mentioned in the lyrics, either directly or allusively.

The song was recorded by Montreal studio owner André Perry with four microphones and a four-track tape recorder. Lennon played acoustic guitar and was joined by Tommy Smothers of the Smothers Brothers, also on acoustic guitar. A wardrobe door provided percussive sounds.

EMI requested that Perry come to the hotel for the recording. He hired a four-track Ampex machine from RCA Victor, and arrived at around 5pm.

Four microphones were used: one for Lennon and his guitar, another for Tommy Smothers, and two for the rest of the room.

Give Peace A Chance was briefly rehearsed, then the recording was quickly done. It took place at around 10pm, and afterwards Perry remained behind to record the song's eventual b-side, Yoko Ono's Remember Love.