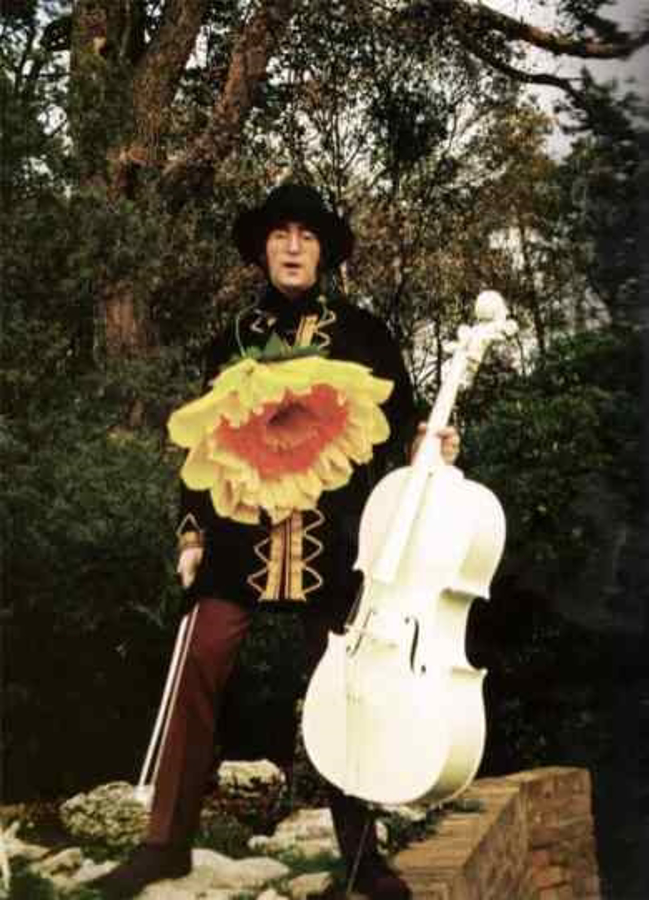 Principally, the Beatles filmed in Ringo's spacious back garden, each of them pretending to play a lovely white cello. (When the West Malling filming was done, Sept. 19 through Sept. 24th, the recording did not feature cello, the instrument was overdubbed at EMI on October 6th - hence the need for additional shooting now).

When it was John's turn, the others rushed into the picture fooling around with a football. George was also filmed running down some garden steps, and the cello - without a player - was filmed in front of plopping and fizzing fireworks (easily obtained this time of year with Guy Fawkes night only 48 hours away). A number of children were also filmed playing around in the garden. Moving inside the house, a topless Mal Evans was filmed with George's West Malling "Blue Jay Way" sequence projected onto his chest, and then various Beatles were filmed watching "Blue Jay Way" on a screen. John doing so while bobbing to and fro on a rockinghorse (the possession of Ringo's two year old son Zak).

BBC Television bought Magical Mystery Tour for two screenings, the first in black and white on BBC1 (Tuesday, December 26th 1967, Boxing Day) the second on the color channel BBC2, not yet available to all Britons. Additionally, Top Of The Pops twice broadcast short MMT extracts to accompany music performances "The Fool On the Hill" on Thursday, December 28 and then mute footage to accompany the playing of "Hello, Goodbye" on Thursday, January 11th.