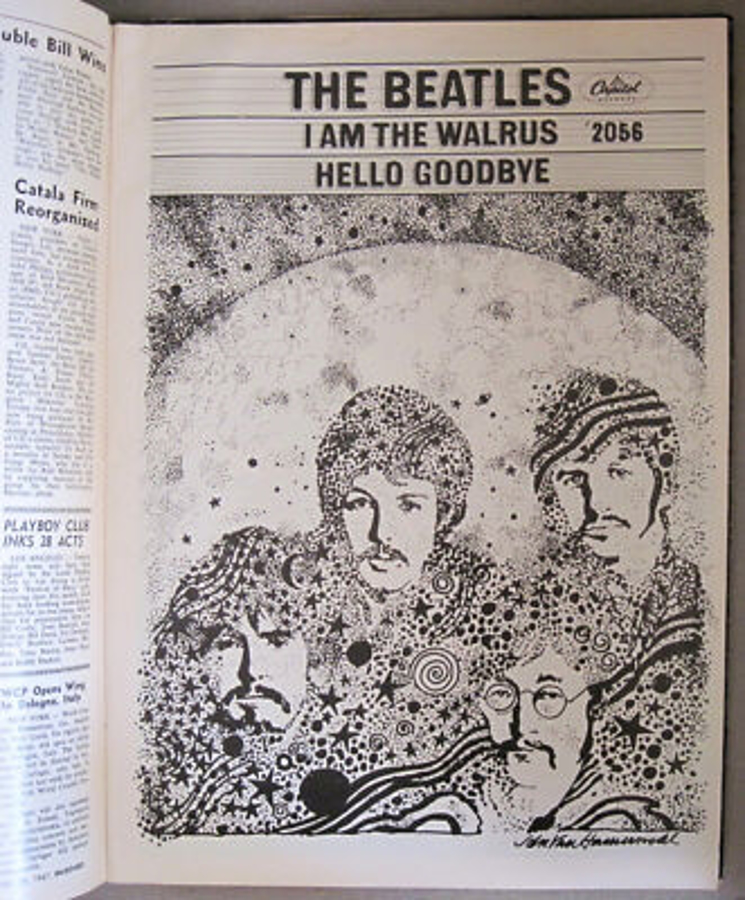 In mid-November 1967, NME's Norrie Drummond had a lunchtime chat with John, Paul and Ringo during a quick break from their work at a small film studio in Soho. At the time of this interview, the Beatles were in the editing stage of their upcoming made-for-TV film 'Magical Mystery Tour.'

Magical Mystery Tour, a psychedelic film, unfortunately would be aired in black-and-white by the BBC. It received mixed reviews from the public, while being slammed by the professional critics. It became famous at that time as the Beatles' first critical failure, yet historically it is also regarded as an early advance into the music video age -- featuring some of the earliest examples of surreal rock videos, including 'I Am The Walrus.' The videos that appear in the 'Magical Mystery Tour' film seemed to further explore the direction that had begun with their earlier promotional video for 'Strawberry Fields Forever.'

The following interview, entitled 'Norrie Drummond Lunches With John, Paul And Ringo,' appeared in the November 25th 1967 issue of the New Musical Express. Topics of discussion include the process of directing and editing their own movie, and Ringo talks about his upcoming film with Richard Burton and Marlon Brando, entitled 'Candy.' Also discussed is the newly-released Beatles song 'I Am The Walrus' and its lyrics 'You let your knickers down' being criticized as too obscene for radio.

Albeit much too brief, an additional tidbit of interest is Drummond's first-hand account of the process as the three Beatles work on the film in the editing studio just before breaking for lunch.

The crudely written sign on the door read 'Magical Mystery Tour' and from within came the strains of 'She Loves You' being played on a barrel-organ. A handful of young girls waiting patiently outside eyed me up and down as I pushed open the door and entered.

The small room was hot and smokey. Long strips of film hung from steel coat racks and dozens of LPs lay scattered around the floor. Empty coffee cups were dotted everywhere with ashtrays spilled over with cigarette butts.

That was the scene last weekend in a small studio in the heart of Soho where the Beatles are at work editing their TV film.

John and Ringo were sitting at a table watching the film through a viewfinder, while Paul was synchronizing the sound of the barrel-organ. George was having a day off work.

"Ah, Drummond's here. Must be time for lunch," said Paul, switching off the music.

The three Beatles pulled on their jackets, and with road manager bodyguard-friend Mal Evans and Peter Brown (the late Brian Epstein's personal assistant), we left for a small restaurant about two blocks away.

Anyone walking through Soho following us with a film camera could have made a wonderful short just by filming the expressions of passers-by. Some looked and recognized. Others looked and puzzled. But most just stared. And as we entered the restaurant one middle-aged lady almost choked over her spaghetti.

"You know, it's just great to be back at work again," declared Paul as we settled down at our table. "For the past eight weeks we've been working regularly -- just like people! We start at about eleven every morning. Have an hour for lunch, and finish about seven in the evening. What's more, we work seven days a week."

Magical Mystery Tour was the Beatles first attempt at editing and directing their own film. Had it been as successful as they hoped?

"Well, we probably won't be finished for another couple of weeks," John replied, "but we're happy with what we've done so far."

"Film-making isn't as difficult as many people imagine," added Paul. "It's a matter of common sense more than anything. We'd never directed anything before and we didn't know about editing, but we're learning. Magical Mystery Tour was an experiment and so far it's been successful."

Did this mean that in future the Beatles would write, produce and direct their own full-length films?

"Mystery Tour is almost a full-length movie," said Ringo, looking up from his plate. "I imagine that we could make a film for cinema showing sometime. We'd like to make our next film that way."

"We learned so much from working on our own," continued Paul. "When we were making 'Help!' with director Dick Lester, he used to ask us to do the same scene over and over again, and at that time we thought it was just because our acting wasn't up to much. But now we realize that it wasn't necessarily so. When a film is being made you generally shoot about ten times as much film as is used in the finished product. Then of course it has to be edited down."

As the main course arrived, conversation changed to Ringo's forthcoming film role in 'Candy' in which he plays the part of a Mexican gardener.

"Yes that's me alright,' he declared in a mock-American accent. "I'll be starring with Burton and Brando. Ringo Starr they call me with the emphasis on Starr." And then more seriously, "Candy is a young girl who goes around making love to lots of men, and I'm the first. We'll be filming in Italy for about two weeks from the beginning of next month. I'm looking forward to it. Although it's only a small part, I'm pleased. It's what they call a cameo role and of course the other names in the film should help it a lot."

This led to the subject of John's appearance in 'How I Won The War.' Was he happy with the rather mixed reception the film had received? "I think the reviews were fair. I was happy with my part. It was an experience."

All three of them were completely knocked out by 'Bonnie And Clyde' when they went to see it. "One of the best films I've ever seen," declared John.

They also went to see 'The Oldest Profession' recently. That's the film which was billed as a 'lusty lustful luscious eyeful,' the star of which is Racquel Welch. "We sneaked in there the other week," said Ringo, "thinking that no one would see us. But when the lights went up we found we were sitting next to a bloke who used to work on Radio Caroline!"

What about the criticism that the group had received regarding the lyrics of 'I Am The Walrus,' the b-side of their new single. "It always seems to happen now, that people misinterpret what we write or say. We're happy with the words and I don't see how they can offend anyone. Do you think they're obscene?" Also to be released shortly is a special presentations pack containing the six recordings from 'Magical Mystery Tour,' along with a 32-page color booklet. Paul stated, "We wanted to do this because when we were young we couldn't think of anything to buy people for presents at that price. The only things you could get were either ties or soap and talcum powder. But we think that the pack is a good present."

"Yes, it's a lovely gift for someone," added Ringo.

"And that's what you're getting," replied John.

"Well, it's about time we got back to work, men," declared Paul, draining his coffee cup. "Lunch break's over."

As we walked back through Soho, Paul suddenly spotted Billy, an old friend of the boys. Billy is about sixty and wanders around Soho with a bottle on his head and a carnation behind each ear. "We'd have loved him for the film," whispered Paul as he, John, Ringo and Billy broke into a chorus of 'Singing The Blues.'

"Long Live the Beatles," shouted Billy as they continued down the street, "and the Stones."