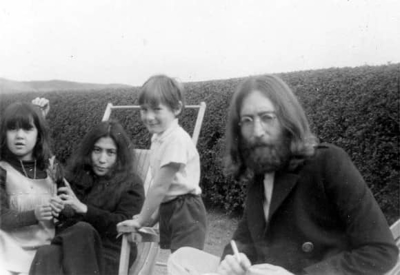 John Lennon and Yoko Ono paid went on a short visit to Wales before setting off on a motoring holiday in Scotland,

First, they drove to Tywyn, a seaside resort on the Cardigan Bay, on the west coast of Wales. With them were Lennon's six-year-old son Julian and Ono's five-year-old daughter Kyoko Cox.

The visit was just days before the investiture ceremony held at Caernarfon Castle in north Wales for Charles, Prince of Wales, which took place on 1 July 1969.

The tourists sent a postcard, bearing the image of the 20-year-old prince, to Ringo Starr and his family, c/o Peter Brown at the Apple offices at 3 Savile Row, London. It contained the simple message: "Hello".

The postcard, bearing the postmark of Tywyn and dated 23 June 1969, was included in Starr's 2004 book Postcards From The Boys.