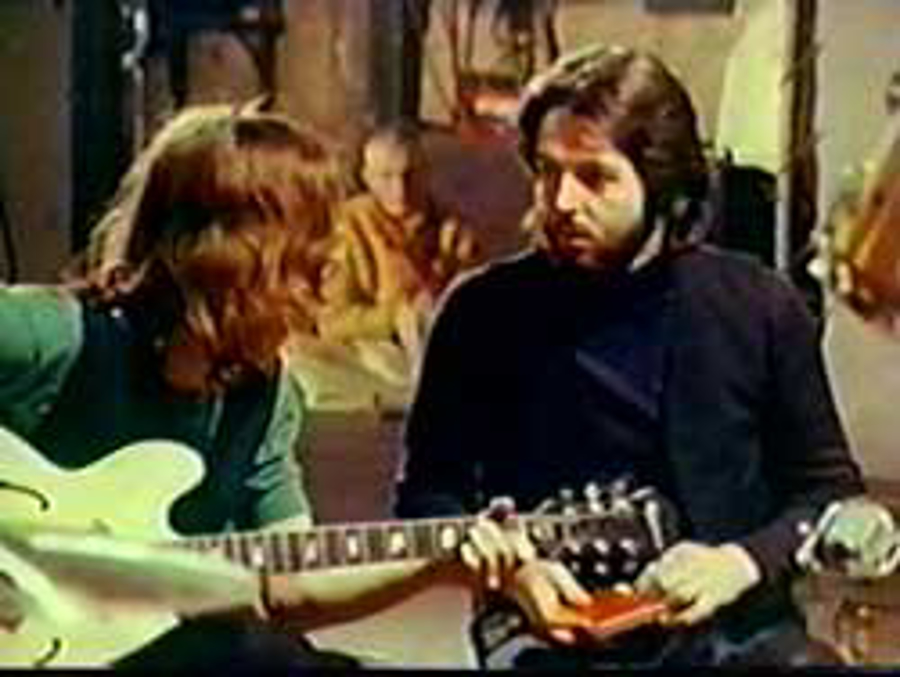 Get It Back/Let It Be Sessions - Today was made up of various jams, cover versions, improvisations, and attempts at recording the more complete songs. And this came with lots of tension within the group.

The songs rehearsed were Don't Let Me Down and Two Of Us. Various arrangements of the former were tested, including a Latin-style rhythm and some harmony vocals by Paul McCartney in the middle section.

Two Of Us was, at this stage, more of a straightforward rock song than in its final incarnation. During rehearsals for it, a terse exchange took place between McCartney and George Harrison which was included in the Let It Be film, and which seemed to encapsulate the strained relations within the group at the time.

The Beatles evidently lacked enthusiasm for a new Harrison song, Hear Me Lord, which its composer first performed acoustically, then on an electric guitar with a wah-wah pedal. He also attempted to enthuse the group in his All Things Must Pass, but to little effect.

Carry That Weight, later to feature on Abbey Road, made its debut on this day, and featured a bridge which was omitted in the final version. Also making first appearances were Octopus's Garden and For You Blue, both of which were brief, incomplete performances.

John Lennon, doubtless aware that his songwriting rate had slowed dramatically since the completion of the White Album, revived Across The Universe – a song the group had recorded early in 1968 but which remained unreleased.

Notable among the improvisations and jams were The Palace Of The King Of The Birds, a McCartney instrumental recorded years later for the unreleased Rupert The Bear album. It featured blues-style guitar and a flowing organ part. He also sang a blues improvisation, You Wear Your Women Out, and did a bit of Primal Therapy-style screaming on My Imagination.

George Harrison sang a song known as Maureen, accompanied just with wah-wah guitar. He is heard to claim that Bob Dylan wrote the song, but it is otherwise unknown and may in fact have been an original composition. Harrison also suggests that it might be a suitable single for Ringo Starr.

The day ended with some lengthy rehearsals of McCartney's new song She Came In Through The Bathroom Window.