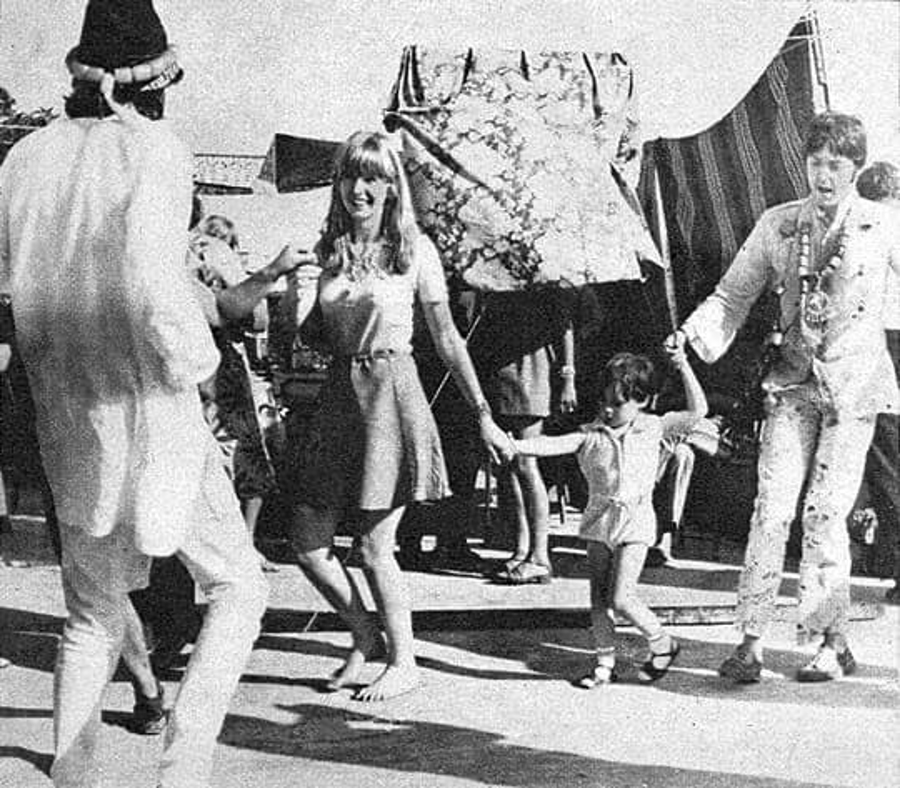 The Beatles visit a Greek island they intended to purchase

In the summer of 1967 The Beatles, encouraged by John Lennon, agreed to buy a set of Greek islands where they intended to live and work alongside family and friends.

We were all going to live together now, in a huge estate. The four Beatles and Brian would have their network at the centre of the compound: a dome of glass and iron tracery (not unlike the old Crystal Palace) above the mutual creative/play area, from which arbours and avenues would lead off like spokes from a wheel to the four vast and incredibly beautiful separate living units. In the outer grounds, the houses of the inner clique: Neil, Mal, Terry [Doran] and Derek, complete with partners, families and friends. Norfolk, perhaps, there was a lot of empty land there. What an idea! No thought of wind or rain or flood, and as for cold... there would be no more cold when we were through with the world. We would set up a chain reaction so strong that nothing could stand in our way. And why the hell not? 'They've tried everything else,' said John realistically. 'Wars, nationalism, fascism, communism, capitalism, nastiness, religion - none of it works. So why not this?'

The main island is often referred to as Leslo, although no island of that name appears to exist. It was apparently surrounded by four smaller islands upon which The Beatles were to have separate villas.

The group, minus Ringo Starr, who had left for England earlier in the day, were taken around the islands to the south of Athens aboard their hired yacht, the MV Arvi. The boat had 24 berths and a crew of eight, including the captain, a chef and two stewards.

We rented a boat and sailed it up and down the coast from Athens, looking at islands. Somebody had said we should invest some money, so we thought: 'Well, let's buy an island. We'll just go there and drop out.'

It was a great trip. John and I were on acid all the time, sitting on the front of the ship playing ukuleles. Greece was on the left; a big island on the right. The sun was shining and we sang 'Hare Krishna' for hours and hours. Eventually we landed on a little beach with a village, but as soon as we stepped off the boat it started pouring with rain. There were storms and lightning, and the only building on the island was a little fisherman's cottage - so we all piled in: ''Scuse us, squire. You don't mind if we come and shelter in your cottage, do you?'

The island was covered in big pebbles, but Alex (Alexis "Magic Alex" Mardas) said, 'It doesn't matter. We'll have the military come and lift them all off and carry them away.' But we got back on the boat and sailed away, and never thought about the island again.

The Beatles spent the early part of the day island-hopping, swimming, sunbathing and taking drugs. They then visited the island they intended to buy. NEMS employee Alistair Taylor was then sent back to London to arrange its purchase.

We went on the boat and sat around and took acid. It was good fun being with everyone, with nippier moments. For me the pace was a bit wearing. I probably could have done with some straight windows occasionally, I'd have enjoyed it a bit more. But nothing came of that, because we went out there and thought, We've done it now. That was it for a couple of weeks. Great, wasn't it? Now we don't need it. Having been out there, I don't think we needed to go back. Probably the best way to not buy a Greek island is to go out there for a bit.

The Beatles were required to buy special export dollars before applying to the Greek government for permission to spend them. Alistair Taylor eventually got clearance for the purchase of the islands, but by that time the group had moved on. The £90,000-worth of dollars was sold back to the government, and the value had risen giving The Beatles £11,400 profit on the unrealised deal.

It was about the only time The Beatles ever made any money on a business venture. To make the purchase, we'd changed the money into international dollars or some currency. Then, when they changed the money back, the exchange rate had gone up and so we made about twenty shillings or so. (George Harrison)