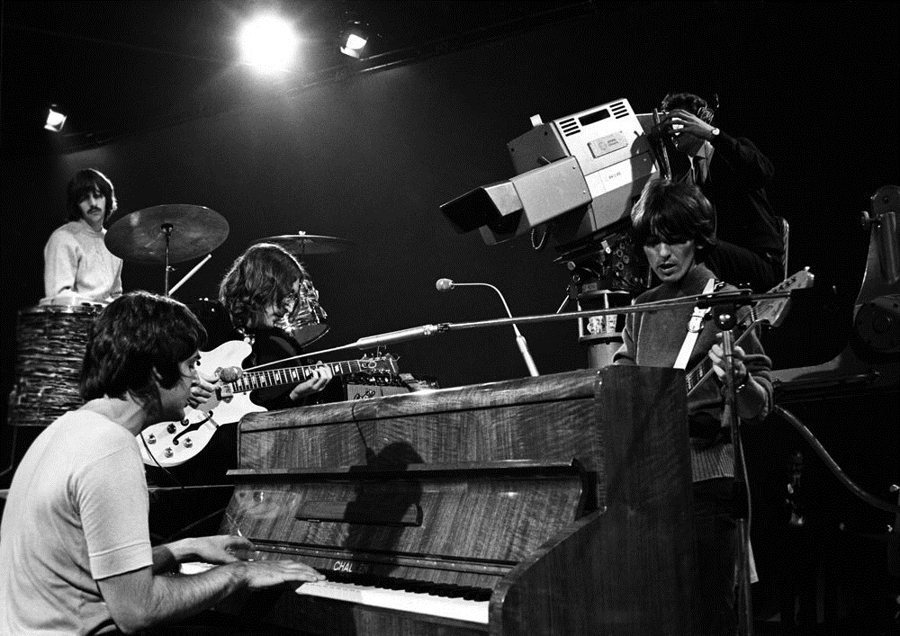 On this day The Beatles filmed promotional films for Hey Jude and Revolution at Twickenham Film Studios.

They arrived at the studios at 1.30pm and worked until evening. The set, at the studio's stage one, had been assembled over the previous three days. Only The Beatles' lead and backing vocals were recorded live, although instruments and amplifiers were set up. The Musicians' Union had placed a ban on miming, and the live vocals were an attempt to hide this.

The completed films – two for each song, both in colour – were directed by Michael Lindsay-Hogg, whom had worked with The Beatles on the clips for Paperback Writer and Rain in 1966. Hey Jude was the first to be made, and featured Paul McCartney seated at an upright piano, John Lennon and George Harrison on a nearby podium with guitars, and Ringo Starr positioned on a drum riser behind them.

A 36-piece orchestra was also assembled, the members wearing white tuxedos, and 300 extras were brought in for the finale. The latter had been recruited after 20 students handed out leaflets in the area, and The Beatles' assistant Mal Evans invited a number of fans from outside EMI Studios.

At least three takes of Hey Jude were filmed, and the most commonly-seen promo was an edit of takes one and three. In each of them McCartney sang along to the studio vocals, and ad-libbed live during the extended ending.

The Hey Jude film had its world premiere on 8 September 1968 on Frost On Saturday, presented by David Frost. To make it seem as though The Beatles were on the programme, David Frost visited Twickenham on this day to record an introduction.

We made a film in front of an audience. They had brought people in for Hey Jude. it wasn't done just for David Frost, but it was shown on his show and he was actually there when we filmed it. (George Harrison-Anthology)

At that point The Beatles broke into an impromptu rendition of Elvis Presley's It's Now Or Never, although this was edited out of the broadcast.

For the Revolution clips The Beatles overdubbed a new vocal track onto the studio version. Paul McCartney performed the scream during the introduction, and the 'shoo-be doo-wop' backing vocals from the slower, then-unreleased Revolution 1 were sung.

The only contemporary UK screening of the Revolution clip was on the BBC's Top Of The Pops on Thursday 19 September.