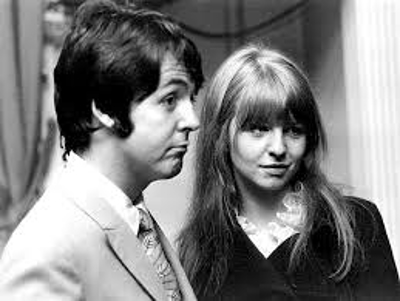 In an appearance on the BBC Television show Dee Time, Jane Asher announced to the host, Simon Dee, that her engagement to Paul McCartney was over.

I haven't broken it off, but it is broken off, finished.

I know it sounds corny, but we still see each other and love each other, but it hasn't worked out. Perhaps we'll be childhood sweethearts and meet again and get married when we're about 70.

Tellingly, Asher had failed to attend the world première of Yellow Submarine three days earlier; all the other Beatles' partners were there.

I always feel very wary including Jane in The Beatles' history. She's never gone into print about our relationship, whilst everyone on earth has sold their story. So I'd feel weird being the one to kiss and tell.

We had a good relationship. Even with touring there were enough occasions to keep a reasonable relationship going. To tell the truth, the women at that time got sidelined. Now it would be seen as very chauvinist of us. Then it was like: 'We are four miners who go down the pit. You don't need women down the pit, do you? We won't have women down the pit.' A lot of what we, The Beatles, did was very much in an enclosed scene. Other people found it difficult – even John's wife, Cynthia, found it very difficult – to penetrate the screen that we had around us. As a kind of safety barrier we had a lot of 'in' jokes, little signs, references to music; we had a common bond in that and it was very difficult for any 'outsider' to penetrate. That possibly wasn't good for relationships back then. Paul McCartney/Anthology

McCartney and Asher had been together for five years, since meeting at the Royal Albert Hall in 1963. However, McCartney had a string of other girls, mainly while The Beatles were touring – and in 1968 began an affair with an American woman, Francie Schwartz.

Asher arrived unexpectedly at McCartney's home in Cavendish Avenue, London, where she reportedly found him in bed with Schwartz. She walked out and sent her mother to collect her belongings, signalling an end to the relationship.

I think inevitably when I moved to Cavendish Avenue, I realised that she and I weren't really going to be the thing we'd always thought we might be. Once or twice we talked about getting married, and plans were afoot but I don't know, something really made me nervous about the whole thing. It just never settled with me, and as that's very important for me, things must feel comfortable for me, I think it's a pretty good gauge if you're lucky enough. You're not always lucky enough, but if they can feel comfortable then there's something very special about that feeling. I hadn't quite managed to be able to get it with Jane.