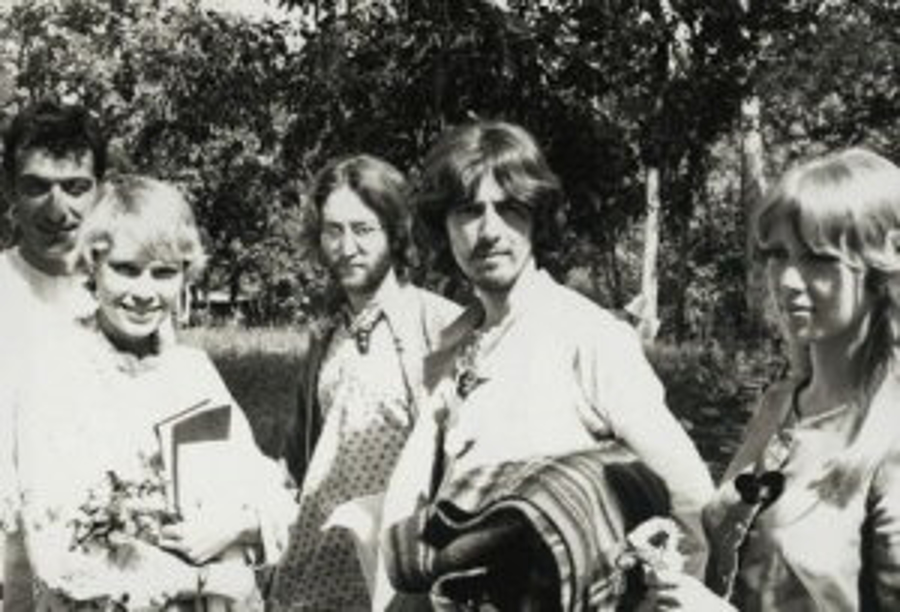 Before George and John left India, Mia Farrow told the Beatles that the Maharishi had made a pass at her. Ned Wynn, one of Farrow's childhood friends, wrote in his 1990 memoir that she had told him in the early 1970s that the Maharishi had definitely made sexual passes at her. In her 1993 autobiography, Cooke de Herrera wrote that Farrow had confided to her, before the arrival of the Beatles, that the Maharishi had made a pass during a private puja ceremony by stroking her hair. Cooke de Herrera wrote that she told Farrow that she had misinterpreted the Maharishi's actions. Farrow's 1997 memoirs are ambiguous, describing an encounter with the Maharishi in his private meditation "cave" when he tried to put his arms around her. She reports that her sister Prudence told her that it was "an honour" and "a tradition" for a "holy man" to touch someone after meditation.

In Pattie Boyd's account, it was allegations of the Maharishi's sexual impropriety that caused events at the retreat to go "horribly wrong". Lennon became convinced that the Maharishi, who said he was celibate, had made a pass at Farrow or was having relations with other young female students. According to Mardas, an American teacher named Rosalyn Bonas had told him and Lennon that the Maharishi had made "sexual advances" towards her. However, Cynthia Lennon said she thought Mardas had put the "young and impressionable" girl up to it. Brown recalls that Mardas told him that a young blonde nurse from California had said she'd had a sexual relationship with the Maharishi. Mardas arranged to spy on the Maharishi when Bonas was with him, and said that he saw the two of them in a compromising position. At the same time, many of the people who were there, including Harrison, Horn, Cooke de Herrera, Cynthia Lennon and Jenny Boyd did not believe that the Maharishi had made a pass at any woman. According to Cynthia, Mardas' allegations about the Maharishi's indiscretions with a female gained momentum "without a single shred of evidence or justification". Pattie Boyd also expressed doubt regarding the truth behind Mardas' claims, but in this atmosphere of suspicion, she had a "horrid dream about Maharishi" and, the next day, told Harrison that they should leave.