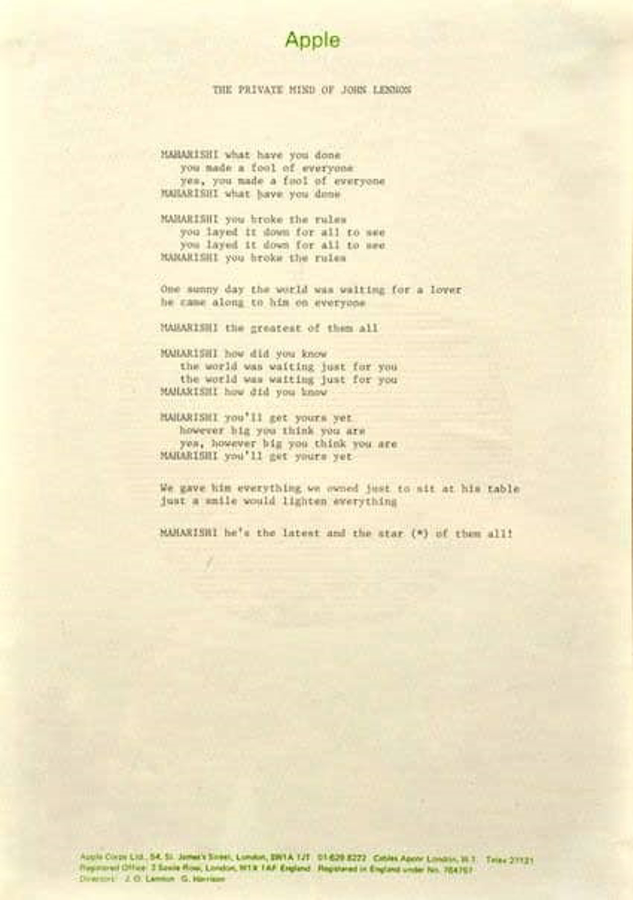 After nearly two months in Rishikesh, India, studying Transcendental Meditation with Maharishi Mahesh Yogi, John Lennon and George Harrison left the camp. Also with them were Cynthia Lennon, Pattie Harrison and their friend 'Magic' Alex Mardas. They had decided to leave after Mardas convinced the others that Maharishi had attempted to gain sexual favours from female meditators at the camp.

A couple of weeks before we were due to leave, Magic Alex accused the Maharishi of behaving improperly with a young American girl, who was a fellow student. Without allowing the Maharishi an opportunity to defend himself, John and George chose to believe Alex and decided we must all leave. I was upset. I had seen Alex with the girl, who was young and impressionable, and I wondered whether he - whom I had never once seen meditating - was being rather mischievous. I was surprised that John and George had both chosen to believe him. It was only when John and I talked later that he told me he had begun to feel disenchanted with the Maharishi's behavior. He felt that, for a spiritual man, the Maharishi had too much interest in public recognition, celebrities and money. (Cynthia Lennon)

Mardas arranged taxis to take them to Delhi. They planned to stay the night there, but managed to catch an overnight flight back to London.  There was a big hullabaloo about [Maharishi] trying to rape Mia Farrow or trying to get off with Mia Farrow and a few other women, things like that. And we went down to him and we'd stayed up all night discussing, was it true or not true. And when George started thinking it might be true, I thought, 'Well it must be true, 'cause if George is doubting it, there must be something in it.' So we went to see Maharishi, the whole gang of us the next day charged down to his hut, his very rich-looking bungalow in the mountains. And I was the spokesman - as usual, when the dirty work came, I actually had to be leader, whatever the scene was, when it came to the nitty gritty I had to do the speaking. And I said, 'We're leaving.'

'Why?' Hee-hee, all that shit. And I said, 'Well if you're so cosmic, you'll know why. He was always intimating, and there were all his right hand men intimating that he did miracles. He said, 'I don't know why, you must tell me.' And I just kept saying, 'You know why' - and he gave me a look like, 'I'll kill you, bastard.' He gave me such a look, and I knew then when he looked at me, because I'd called his bluff. And I was a bit rough to him. (John Lennon)

Lyrics for The Beatles' song Sexy SadieAs he waited to leave, Lennon began writing the song that would become Sexy Sadie.That was written just as we were leaving, waiting for our bags to be packed in the taxi that never seemed to come. We thought: 'They're deliberately keeping the taxi back so as we can't escape from this madman's camp.' And we had the mad Greek with us who was paranoid as hell. He kept saying, 'It's black magic, black magic. They're gonna keep you here forever.' I must have got away because I'm here. (John Lennon)

Lennon began singing the song as he and George Harrison drove to Delhi. John had a song he had started to write which he was singing: 'Maharishi, what have you done?' and I said, 'You can't say that, it's ridiculous.' I came up with the title of Sexy Sadie and John changed 'Maharishi' to 'Sexy Sadie'. John flew back to Yoko in England and I went to Madras and the south of India and spent another few weeks there. (George Harrison)

George and Pattie Harrison, plus her sister Jenny, visited Ravi Shankar in Madras, where they stayed until 21 April 1968.

George didn't want to go straight from two months of meditation into the chaos that was waiting for him in England - the new business, finding a new manager, the fans and the press. Instead we went to see Ravi Shankar and lost ourselves in his music. (Pattie Boyd)